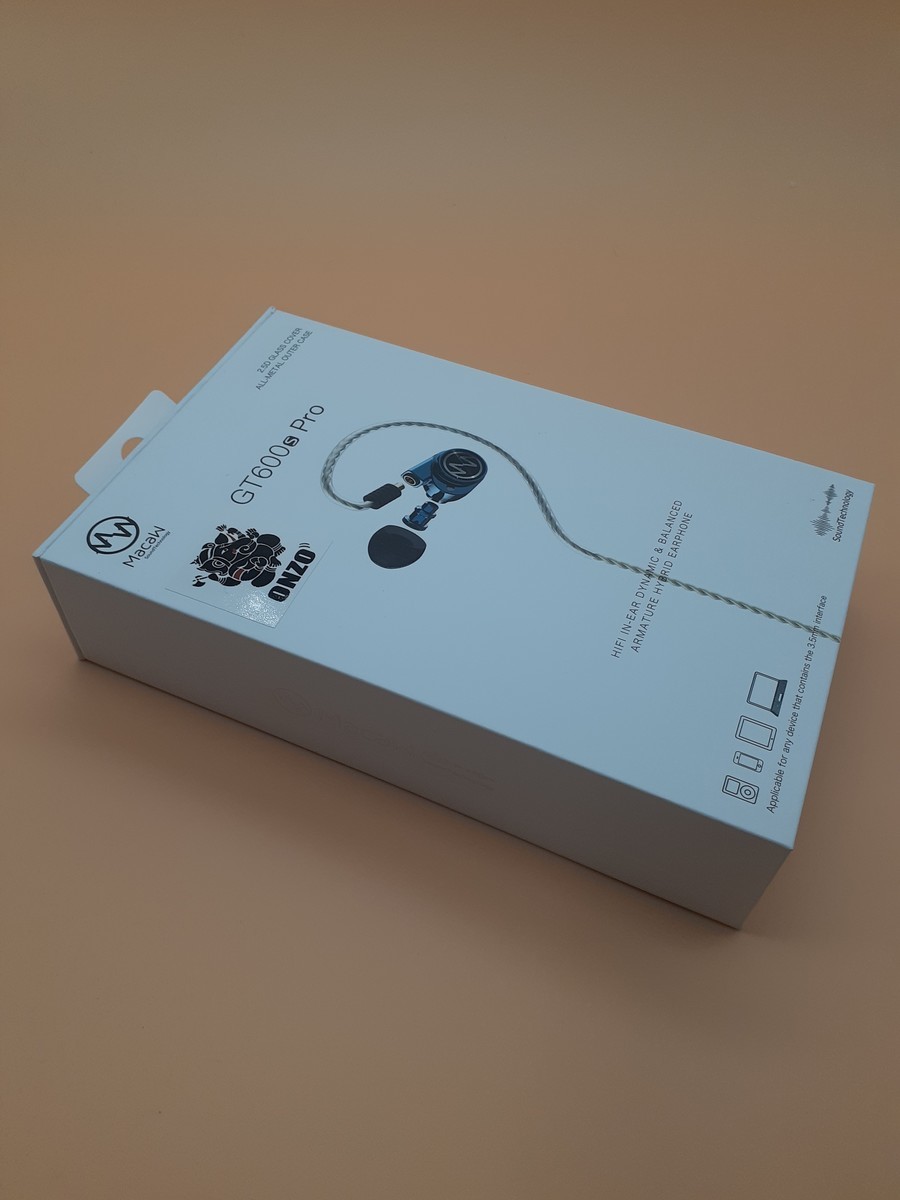 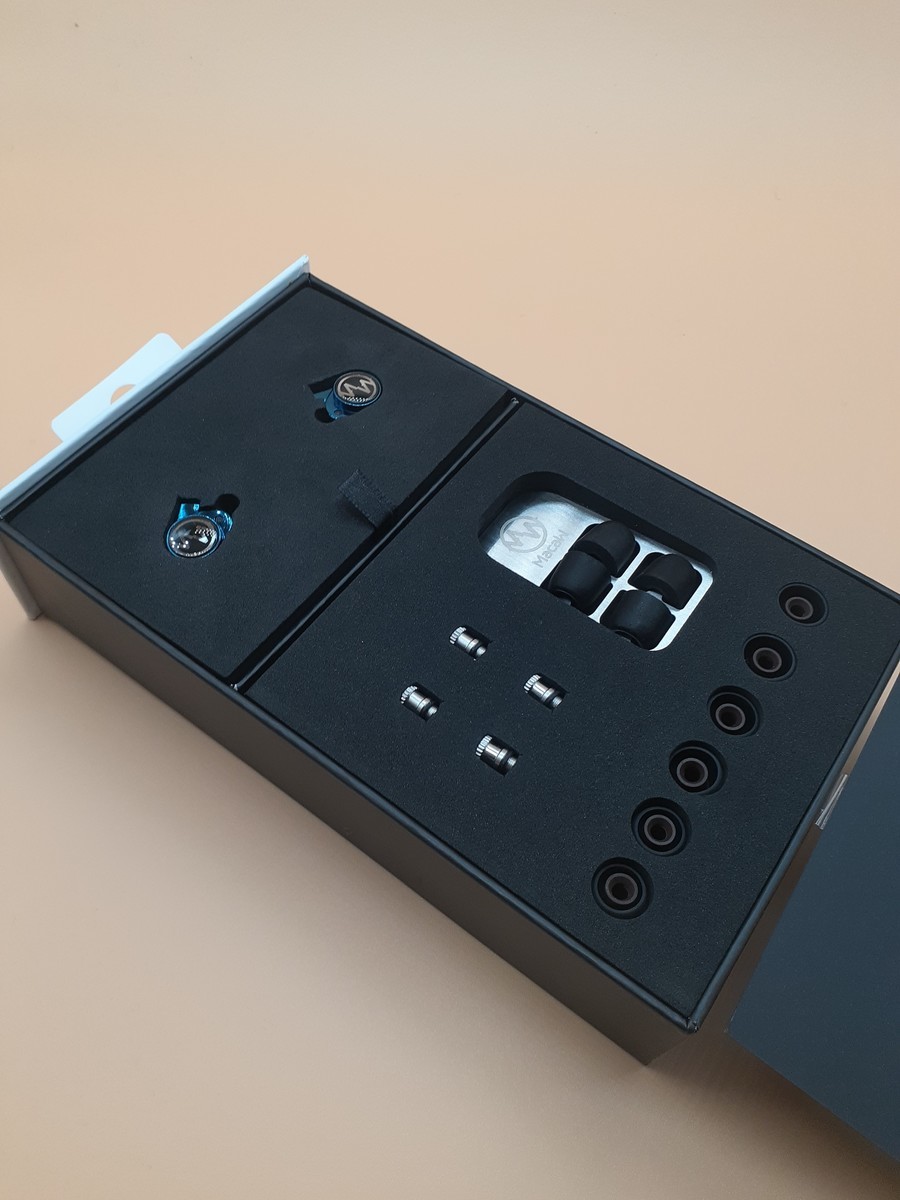 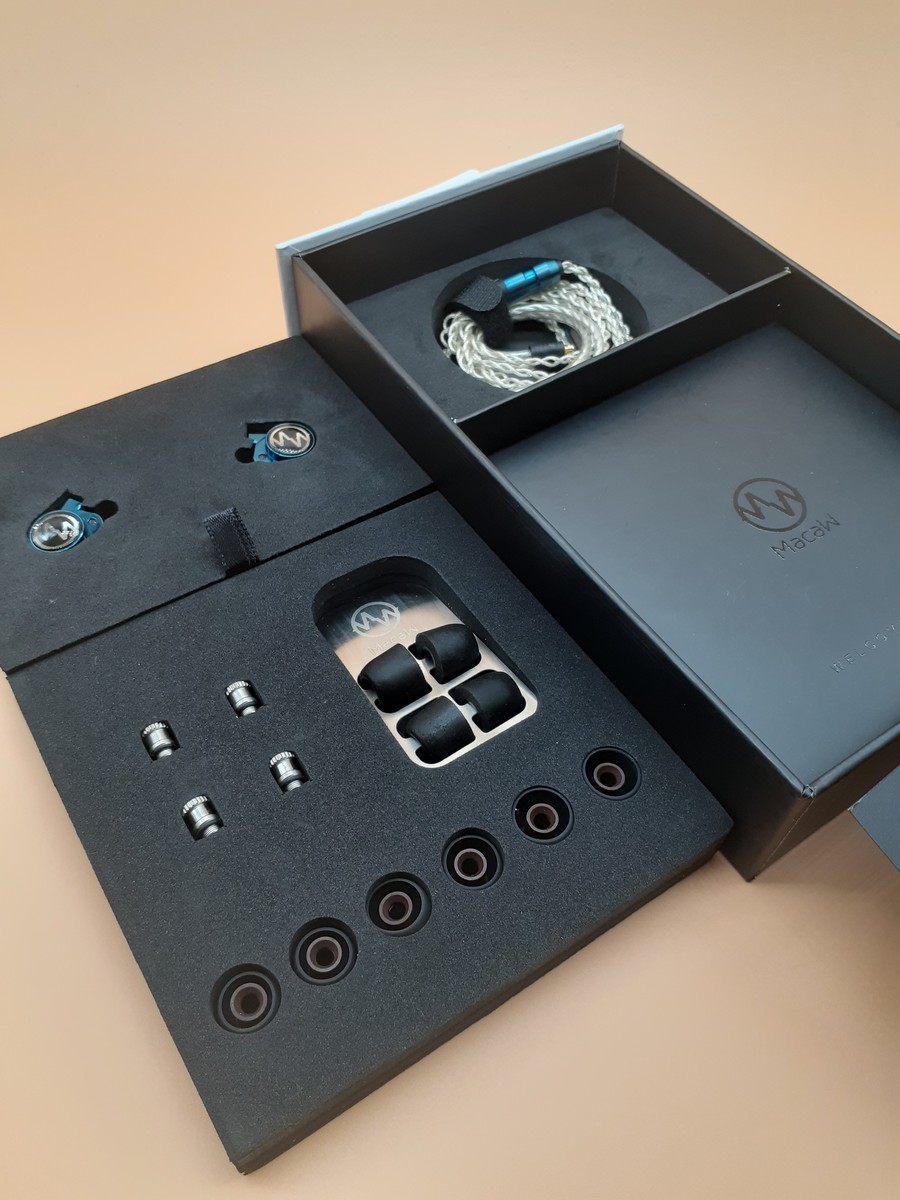 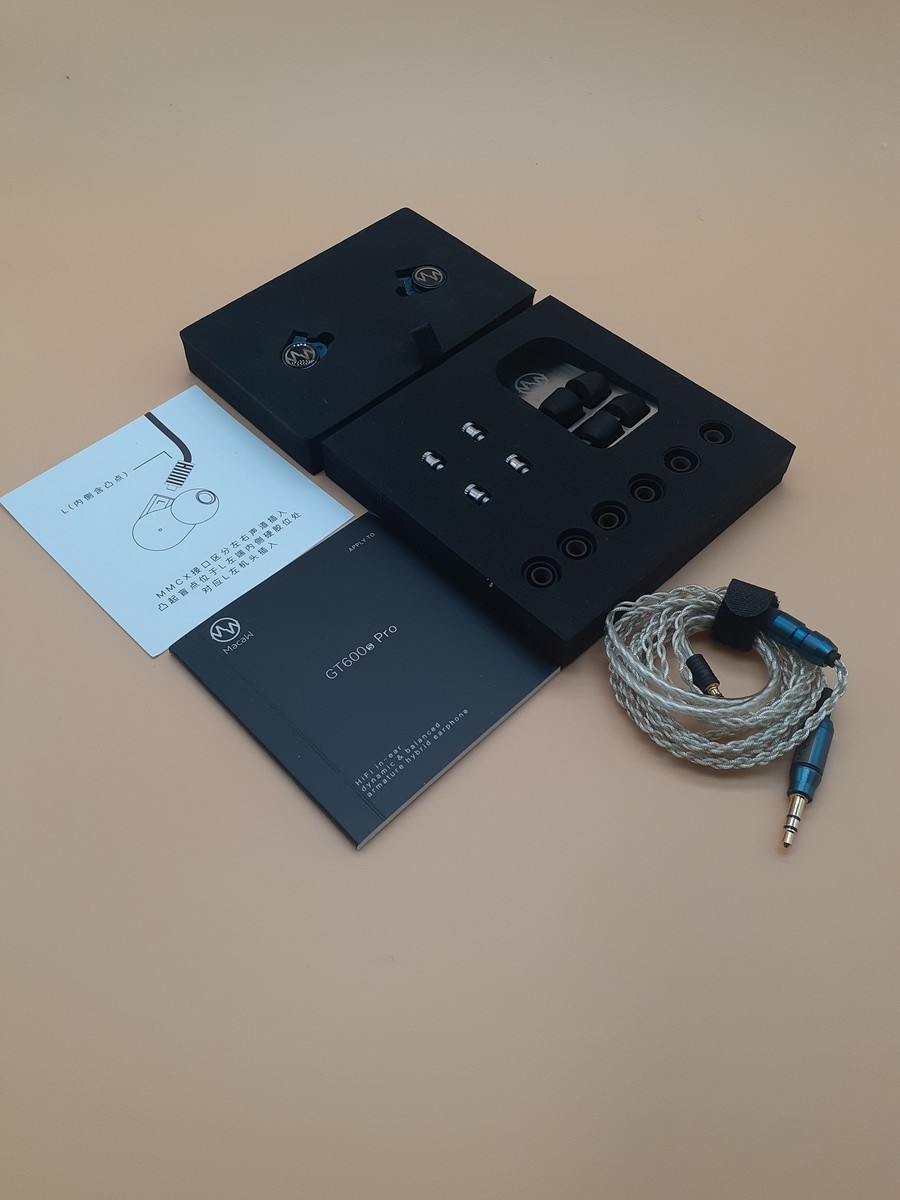 Sound quality: Three types of sounds with three types of nozzles.  The change for each nozzle makes a big change, it can output from a nearly neutral balance to the V-shaped. 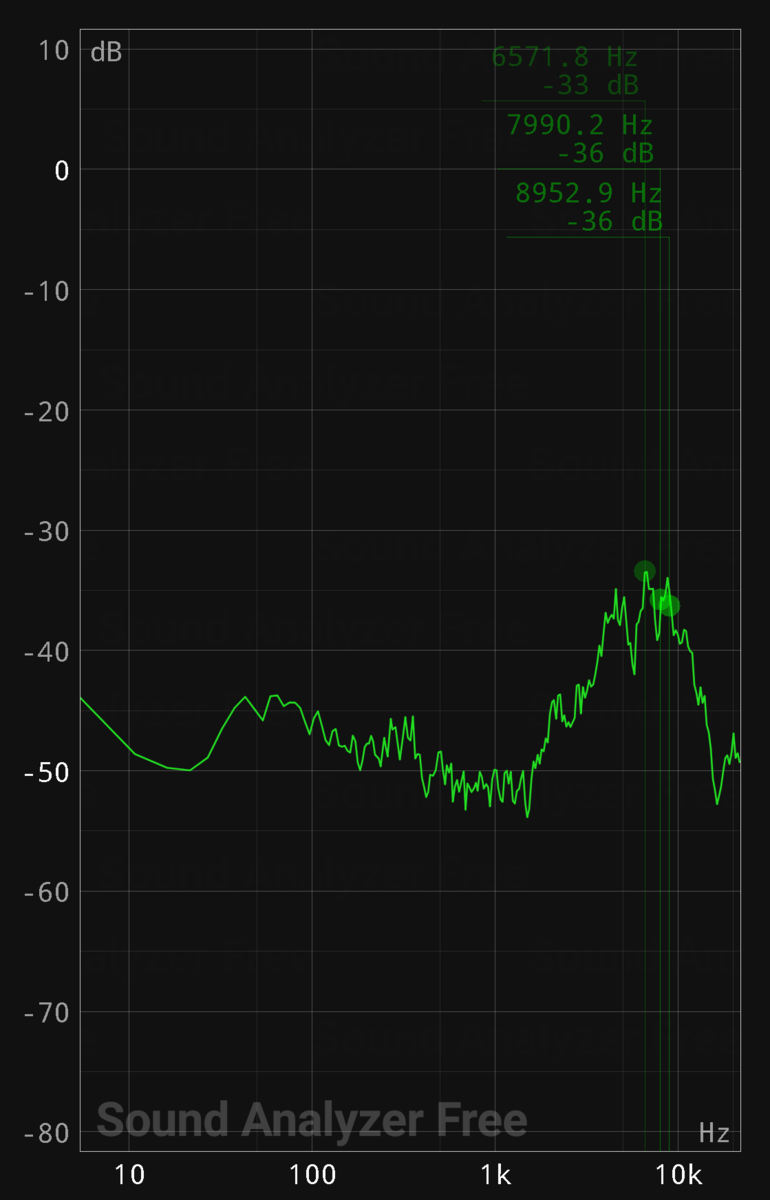 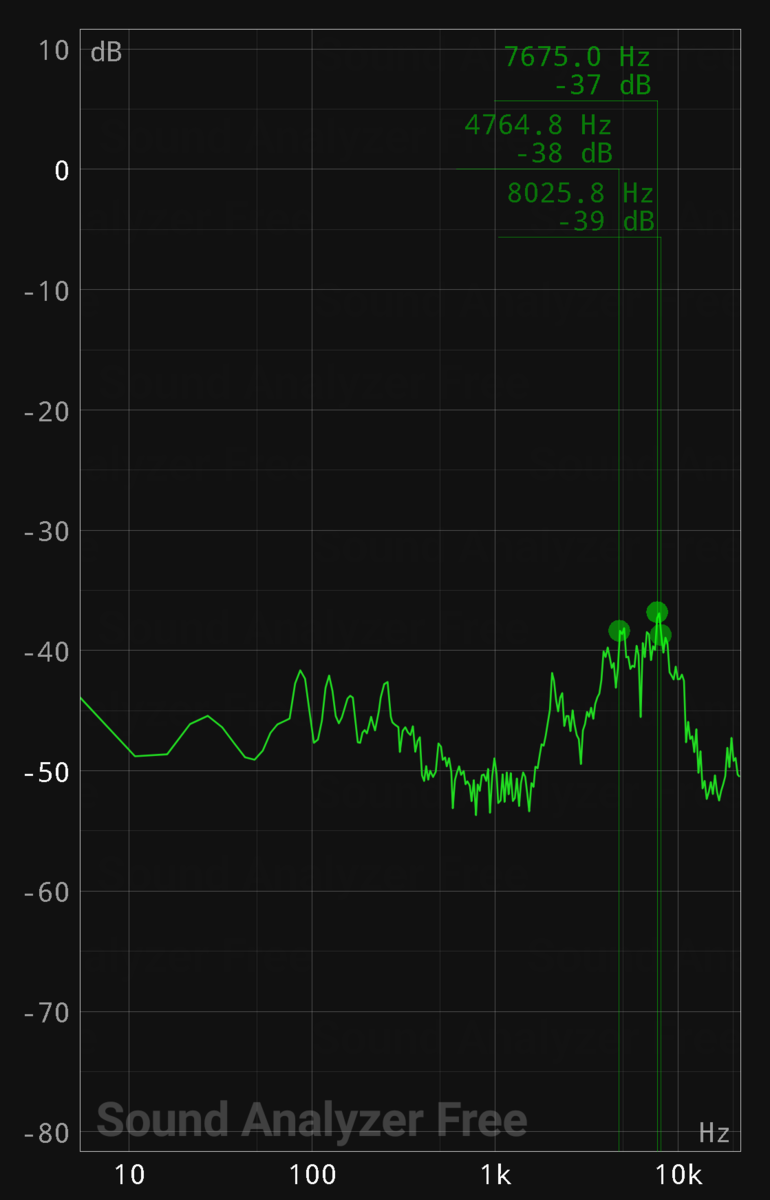 Gold nozzle (high-frequency emphasis; most aggressive with a typical V-shaped) 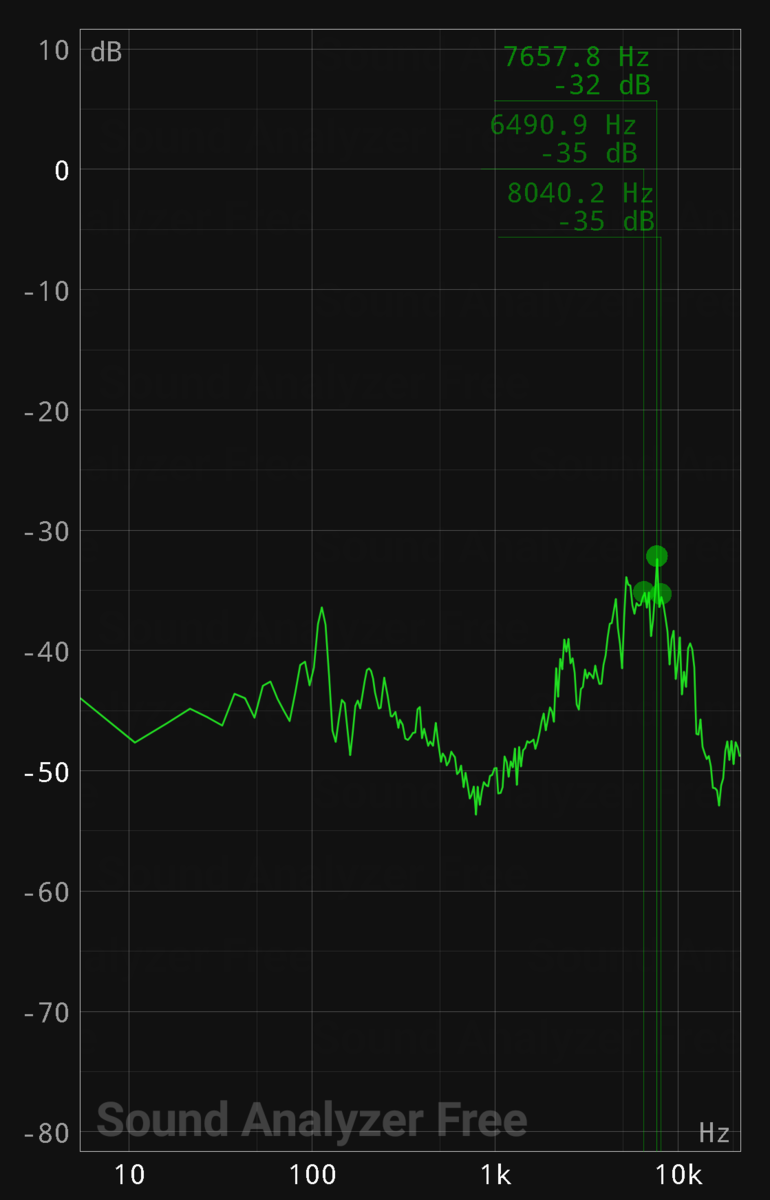 Roughly checking the frequency characteristic image and listening to the sound quality lightly, I thought that a song like "Heart no Iro '' by Inori Minase could be enjoyed with this earphone and the sound quality change was easily felt, so listening this song will briefly explain the differences between the nozzles.

Standard nozzle. The overall impression is a U-shaped sound with a slightly closer to the high frequency side, and the air is good and crisp, but the brightness is relatively suppressed and the sense of cleanliness is emphasized.

It has the best airy sound of all nozzles, there is a refreshing sensation on the vocals, and the snare is not as aggressive as the gold nozzle, but gives a sense of attack, and the hi-hat also makes a strong attack.

Of all the nozzles, the sound is rather height conscious, and the sound field is open. The piano sound has a slightly brighter color than natural, and it is a dignified and translucent tone with a slightly kinky tension. The presence of low frequencies is a bit weak, so there's an overall up-toned feel and the whole music can be heard in an updraft.

This is a low-frequency emphasis nozzle. However, in reality, it is more appropriate to say that the overall sound becomes smooth and neatly flat, rather than emphasizing the low frequencies. In general, the vocals come more forward than with the silver nozzle, and they have the lushest body.

It has the most comfortable and calm sound of all nozzles. While maintaining the high frequency flashiness of the silver nozzle moderately, the sharpness is suppressed and the instrument sounds a little sweeter. Instead, the stretch and dynamism of the instrument sound are clearly reduced, achieving the most stable sound. The rhythm calms down, and the sense of speed is moderately slowed down, but this earphone originally has a faster sense of speed, so you even may feel faster.

Although the electric bass guitar sound becomes clearer, the low range of this earphone is originally thin, so the presence of low range can't satisfy the bass head though it claims to emphasize lows.

This claims to be a high-frequency emphasis nozzle. However, it is actually a nozzle that deepens the valleys in the midrange and raises the mid-high range to create a V-shaped sound with an emphasized attack. Therefore, in fact, the height of the air seems better with the silver nozzle, and you may feel that the sound extends higher.

The black nozzle has increased the body of the vocal, but it emphasizes the most sexy areas of the vocal, adding a glossy and gorgeous atmosphere and advancing the vocal like a black one. It is not easy to judge which nozzle moves more forward because the emphasized position on the vocals is different, but in general black is better for male vocals and gold is better for female vocals. Seasoning of vocals may be a little stronger as consonants are more emphasized. The sibilance is more likely to occur.

The mid-high instrument sounds are very aggressive, with the snare moving forward the most, emphasizing the viscous feel, and the hi-hat increasing the glare. On the other hand, the depth of the mids is increased, so the piano recedes slightly, the outlook of the mids is very good, it's more three-dimensional positioned and overhead localized, and the left and right of the sound stage get a bit wider. Actually, it is written in the manual that it is suitable for classical music, the atmosphere of the sound field becomes orchestral whether the impressions of the sound are classical or not on your preference.

The rhythm has the fastest sense of speed, aggressive knocking, and the strongest attack.

It has a glossy and gorgeous sound that silver nozzles and black nozzles did not have, but it has a strong shine in the mid-high range, strong extrusion, easy to rattle, and a feeling of oppression, so it may be easy to make you tired .

This time, we check the first impression using the large size of silicon in the ear tip included.

The biggest feature of silver nozzle among all nozzles of MacaW GT600s Pro may be that vocal body is thin. For example, when listening to a song like "Night of Sixth-Magnitude Star" by Aimer, the starting piano is very glossy, offers a moderately hard shot, and achieves high definition, so the sound quality seems very high resolved. However, the vocal that sings shortly thereafter, from the moment she open her mouth, the sound of breathing in is emphasized and expressed like hiss, breathing sharp, fluffy, dry, so it seems a husky tone like a dog. In addition, the "t" sound has a little sharp point and it is somewhat spicy, and the vocal body does not swell, so the up and down movement is seamless, but there are not many points that can be tasted, and the vocal expression is somewhat straightforward.

Rather, the piano, which has a consistently transparent melody near the vocal, and plays a solid melody that is firmly driven, is lifelike as if it seems to be the main character. The bass is sparse and the presence of electric bass guitars is light, so there is not much massive feeling. The drum is a little shallow, but the attack is a little stronger. So the trend is a tight sound, but it's alive. And the body rumbling is relatively firm, and there is no feeling that the amount is extremely short. In the case of this song, the drum sounds a little sticky and crackling. In this song, the drums are a bit sticky and provides a flurry of sparks.

String music is a little streaky and the overtones are a little stronger. The sound has a slightly crisp edge, but it does not deviate from the natural flavor, and satisfies those who like the overtone atmosphere, but does not set up unnaturalness. It does not make blatant creaking sounds.

Electric guitars are relatively mild, relaxed, and have good visibility（Hanako Oku - "One Step Ahead"）

The song is titled "One Step Ahead", but if you listen with a silver nozzle, the vocals will sound rather one step behind. However, in the mids, the instruments, such as electric guitars, are mild and spaced away from the vocals, and have a slightly more brilliant atmosphere than vocals, but they still refrain from attacking and support the vocals.

The feeling that the piano is more alive than the vocals is the same as "Night of Sixth-Magnitude Star", and the tone is milder. Nevertheless, the sound of the piano is solid, powerful and glossy, so the sound is sharper than vocals, has more clues, and excels in presence.

On the whole, the vocal feels like a piano, and in a climax where the breath is high, the head is raised higher than the piano, giving a sense of penetration. Elsewhere, there is an impression that the presence of the piano is holding down the head of the vocals.

Warmth is a little scarce and sounds pretty hard and cool. For example, when I listen to "Small Love Song" by Rie Takahashi, the acoustic guitar is quite hard and crisp with glaring. The cymbals are also hard, shining rather than sharp, and the vocals and lows don't have much warmth, so this song sounds very metallic. Therefore, there is a feeling of miniature, and there may be atmosphere close to music box sound.

I've already talked about the lack of vocal bodies so much, so I won't repeat it. The song has a relatively sweet and glossy vocal, the vocals are dry, the breath and sibilants are emphasized, and the consonants are sharp. The attack is not strong, so it does not feel barking, but rather has a slight natural feel with less luster. The breath is strong, but it feels fine and neat.

Acoustic guitars and cymbals sit near the vocals from beginning to end, producing a slightly gleaming, hard sound, but the indentation is crisp and clean, so it is a flashy sound, but not extremely harsh.

It gives a relatively unpretentious feeling of metallic luster, but provides a hard, glarey feel and has a clean aftertaste, so it will be more comfortable for those who like metallic sounds .The sound is a little flashy and whitish, but the edge of the acoustic guitar is beautiful.

The highs give a lot of detail, so on an EDM track like "Cinnamon" by Snail's House for example, the sound is very disassembled and gives a precise impression. In addition, in the case of this earphone, emphasis is added to the metallic glossiness, so the sparkle of metal is carefully felt in a part of the electronic sound of this song, and not only is it just fine but also we can feel the difference in the texture of the fine particles. There is a little deep color like glare, shining, not twinkling, so you can hear the electronic sound lively.

The lows are sparse and tight, but the floor is shallow and light with a little punch, there is no impression that the bottom is missing. However, since the boom sound is weak, there is no depth and a feeling that the sound is floating. Attack is not so emphasized, so it has a moderately calm atmosphere with little rattle and a clean feeling. The sound does not have a strong jagged feel for the high resolution, but it is slightly jagged but not harsh.

The main thing I want to emphasize here is that this earphone has a sense of separation, excellent resolution, and clean sound. Since it gives a metallic texture in the high frequency range, it does not mean that this earphone just sound sharp, but that they taste good.

This time, I checked the sound quality impression of the silver nozzle of MacaW GT600s Pro. It has a very clean and refreshing atmosphere with a sharp, solid cue and resolution-oriented sound. It was confirmed that the overtones were easy to hear, the metallic sound was beautiful, and the piano had a sufficient presence. I am worried that the bass support is a little weak, the vocals are a bit hoarse, and the body is thin, but for those who like bright, delicate metallic sounds, it sounds pretty good.