The FiiO M15 is a flagship model in the newly launched DAP by FiiO. The feature is that it is equipped with Asahi Kasei's DAC chip AK4499EQ dually, it has almost full Android multifunctionality, it is portable enough to carry, it has ample output interface, and it has a reasonable price at about $ 1500.

However, DAP evaluation is not only about sound quality. You will need to look a bit deeper to see if its performance really is worth the price.

This time, I would like to give everyone a first impression of getting the M15. We will also perform simple functionality and sound quality comparisons with KANN CUBE and Cayin N6II / E01, which are rivals both in price range and concept.

I haven't used FiiO products so much, so I have no clue as to how premium the M15 is in terms of package quality in FiiO products.

However, it seems that the package of FiiO M15 is not inferior in premium feeling compared to the package of my high-end DAP.Packages are not an essential element of DAP, but are briefly introduced here for those interested.

First of all, the makeup box is designed with M15 holographically. I do not know if the Japanese regular version will be the same package, but from the appearance there is an atmosphere of a luxury gadget, and the size of the box is not too large like some Cayin N6II, so it seems to be troublesome to store. 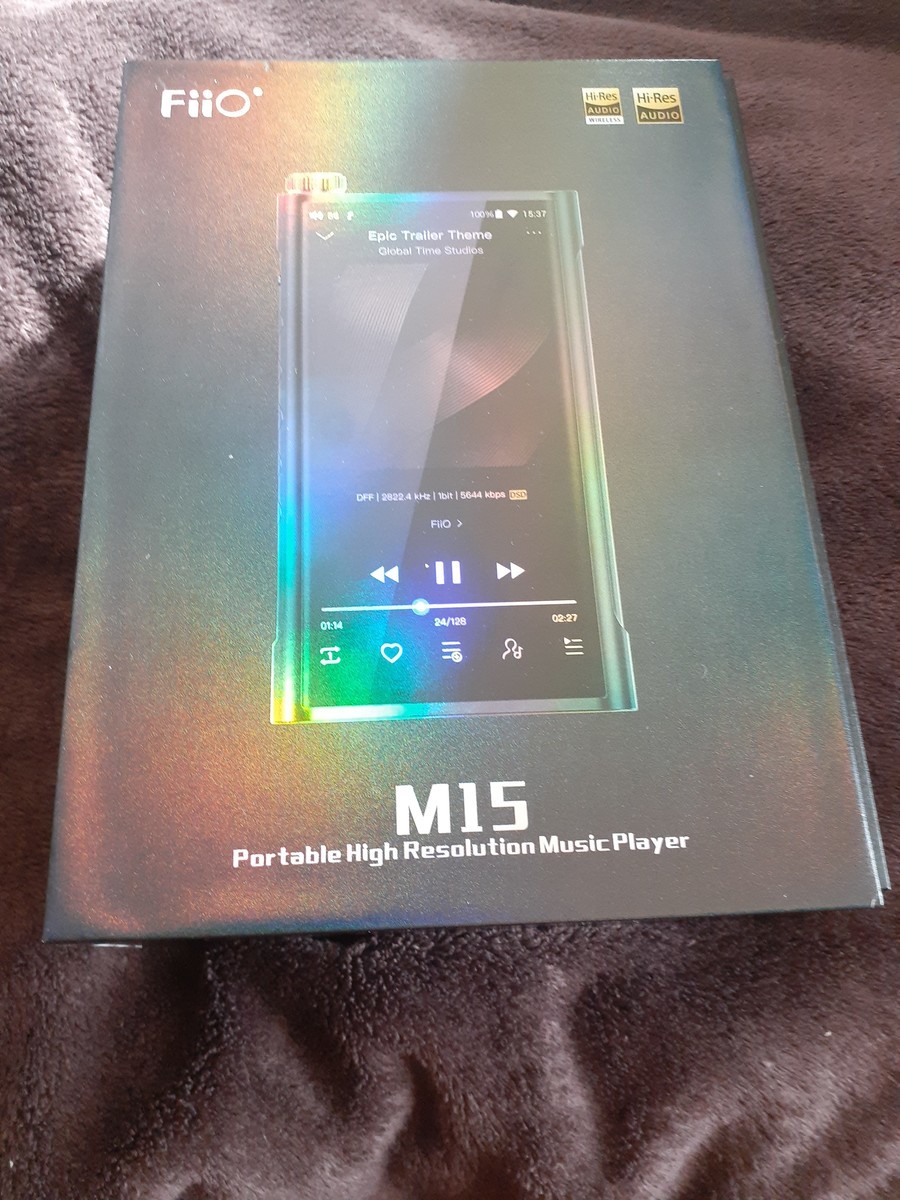 You can slide out the outer box from the cover box and take it out. The outer box has a chic black design, which is different from a decorative cover box in a simple and elegant design. I remembered the chic atmosphere of the outer box of KANN CUBE. 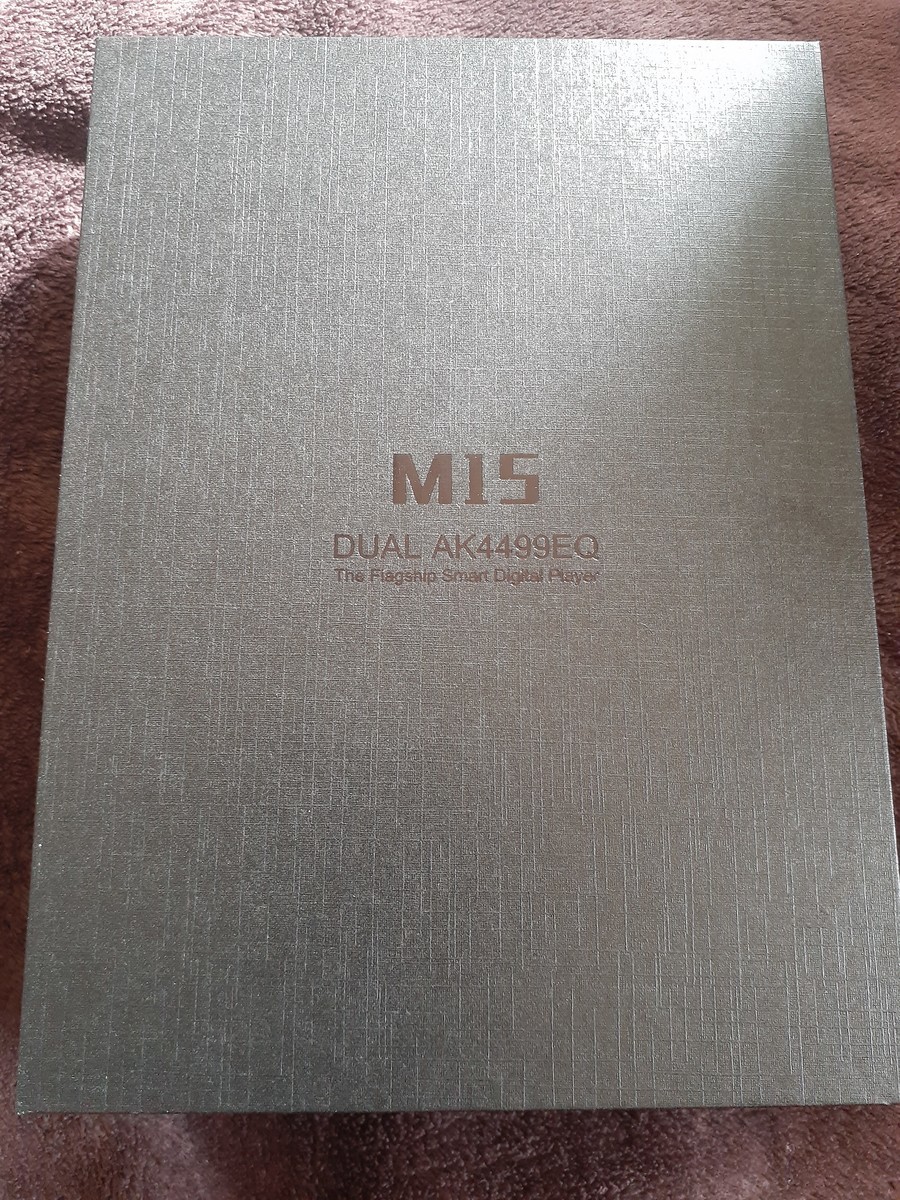 Inside the outer box is a wooden inner box, which is sealed with a belt. Although the size is not large, the expression changes each time it is opened. There is a smart trick to enjoy while imagining the M15 inside. 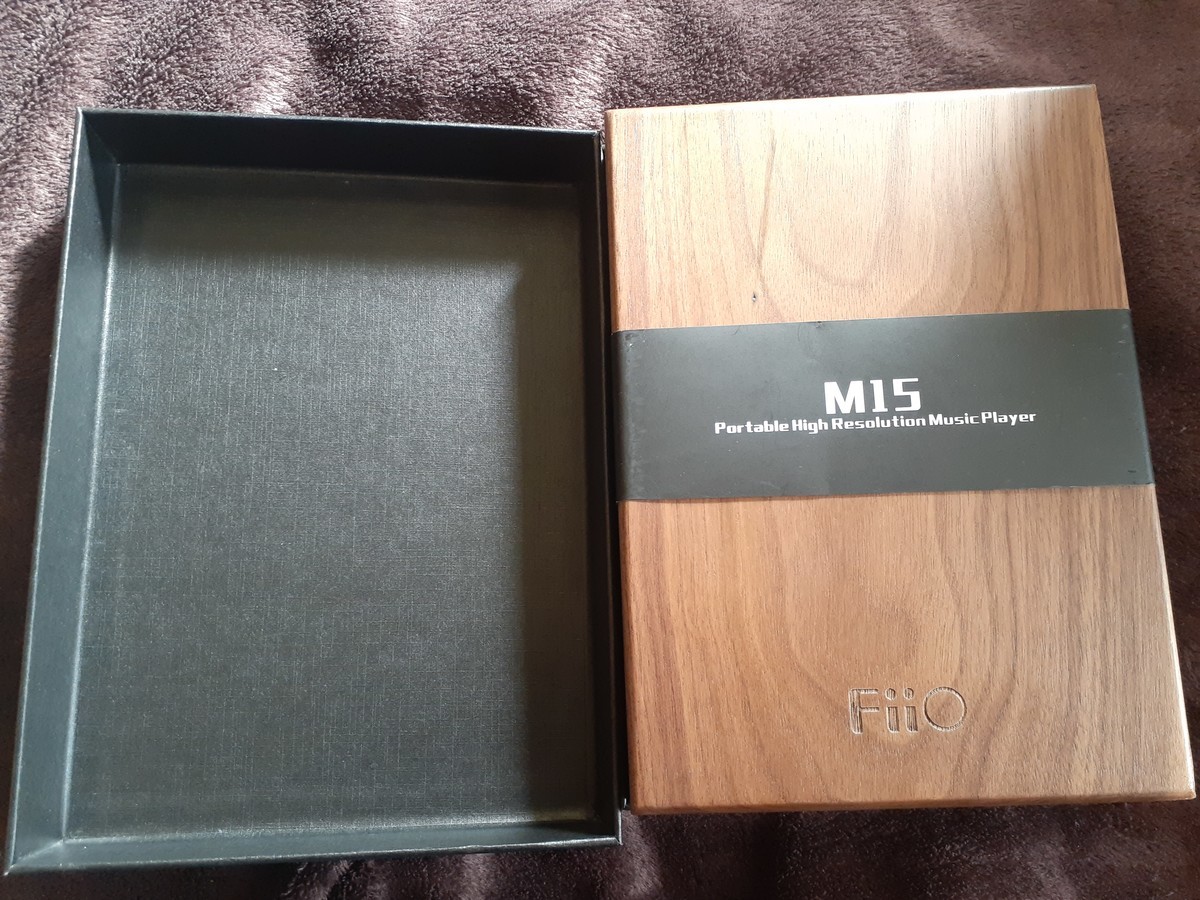 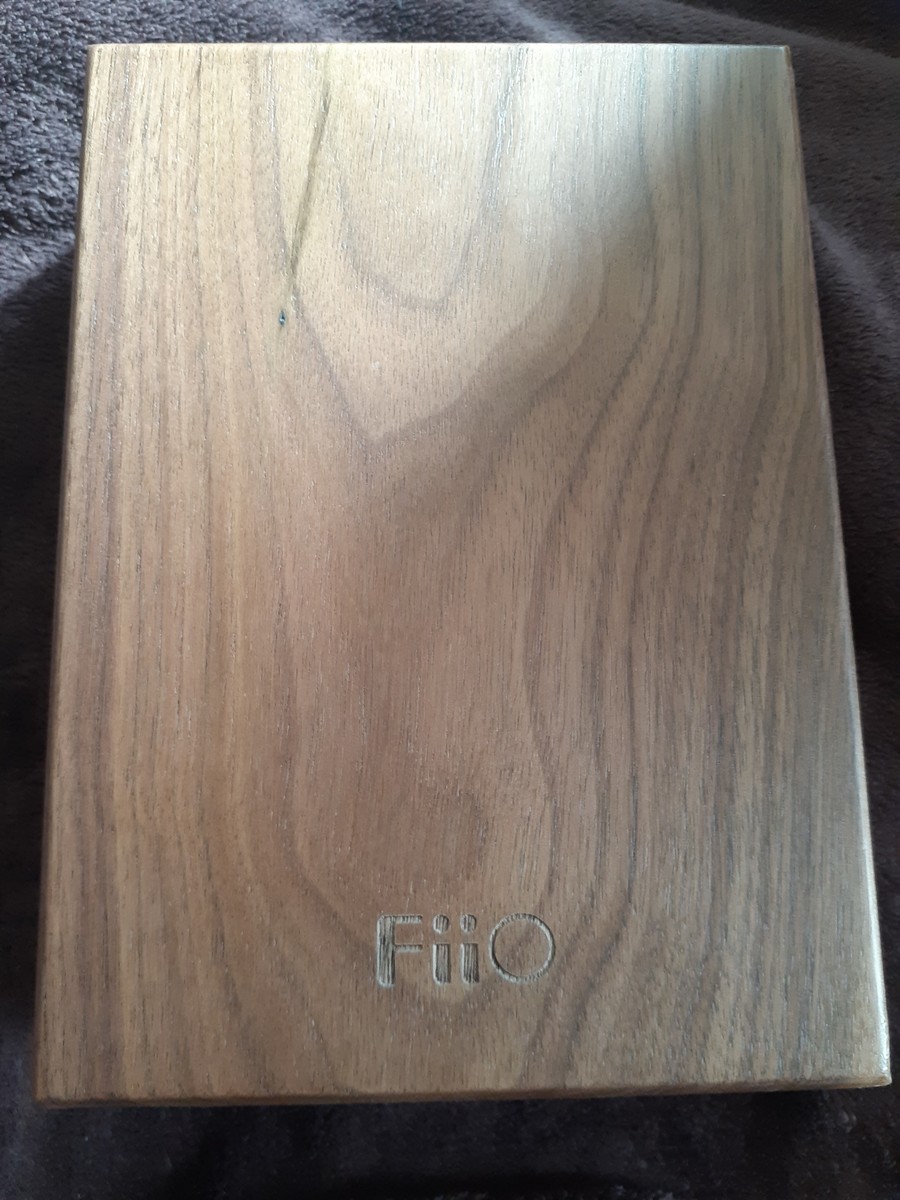 There contains the FiiO M15. The accessories seem to be under the layer of the M15 body. 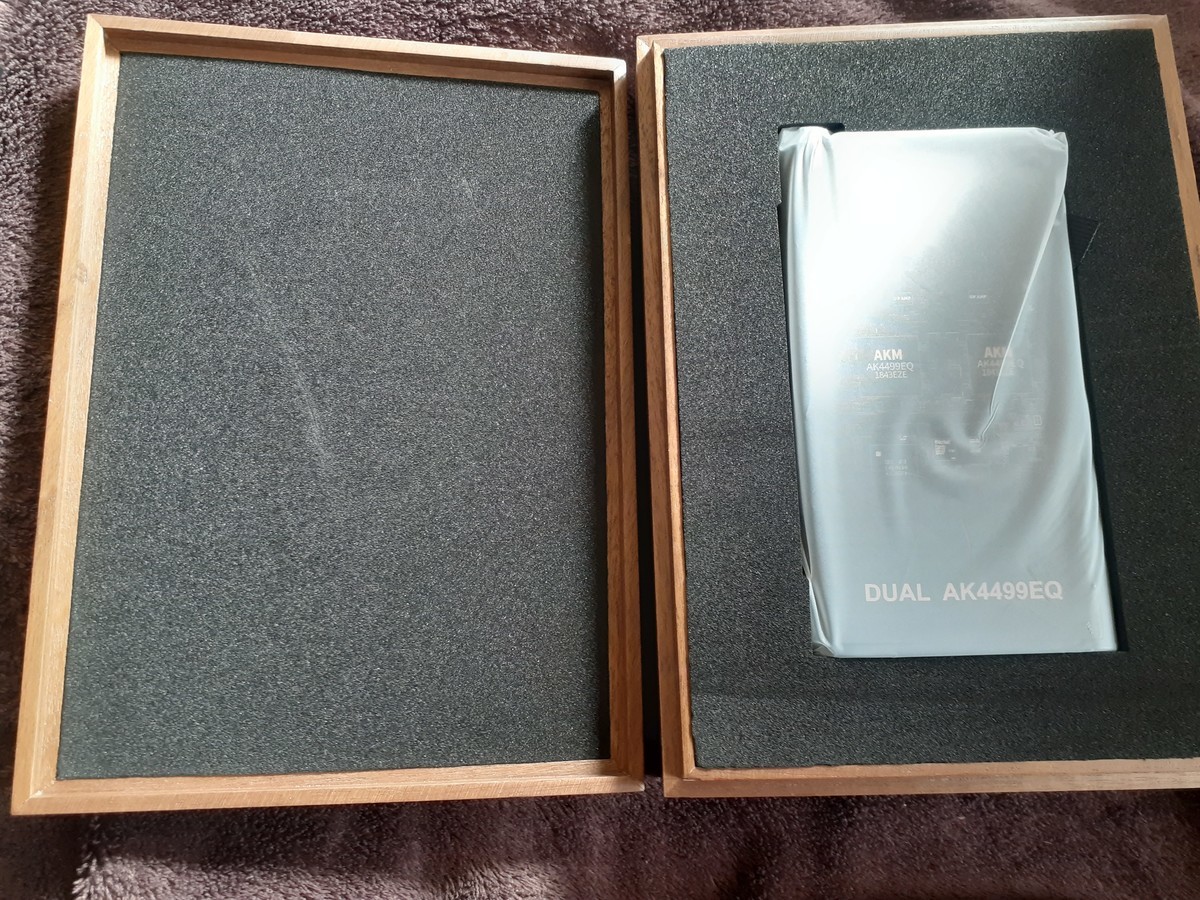 Accessories are included in the lower layer. Let's open it! 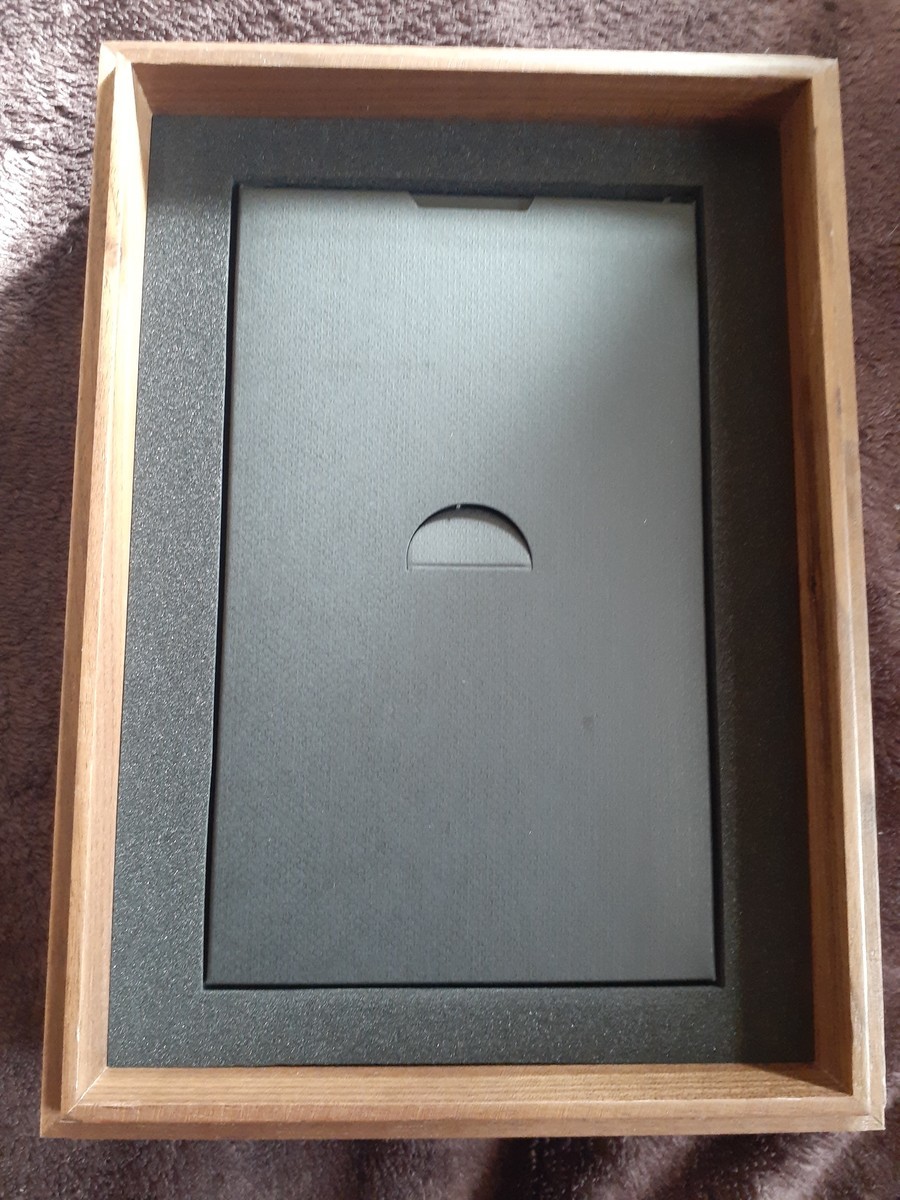 I will arrange the accessories. In addition, it includes a SIM pin. 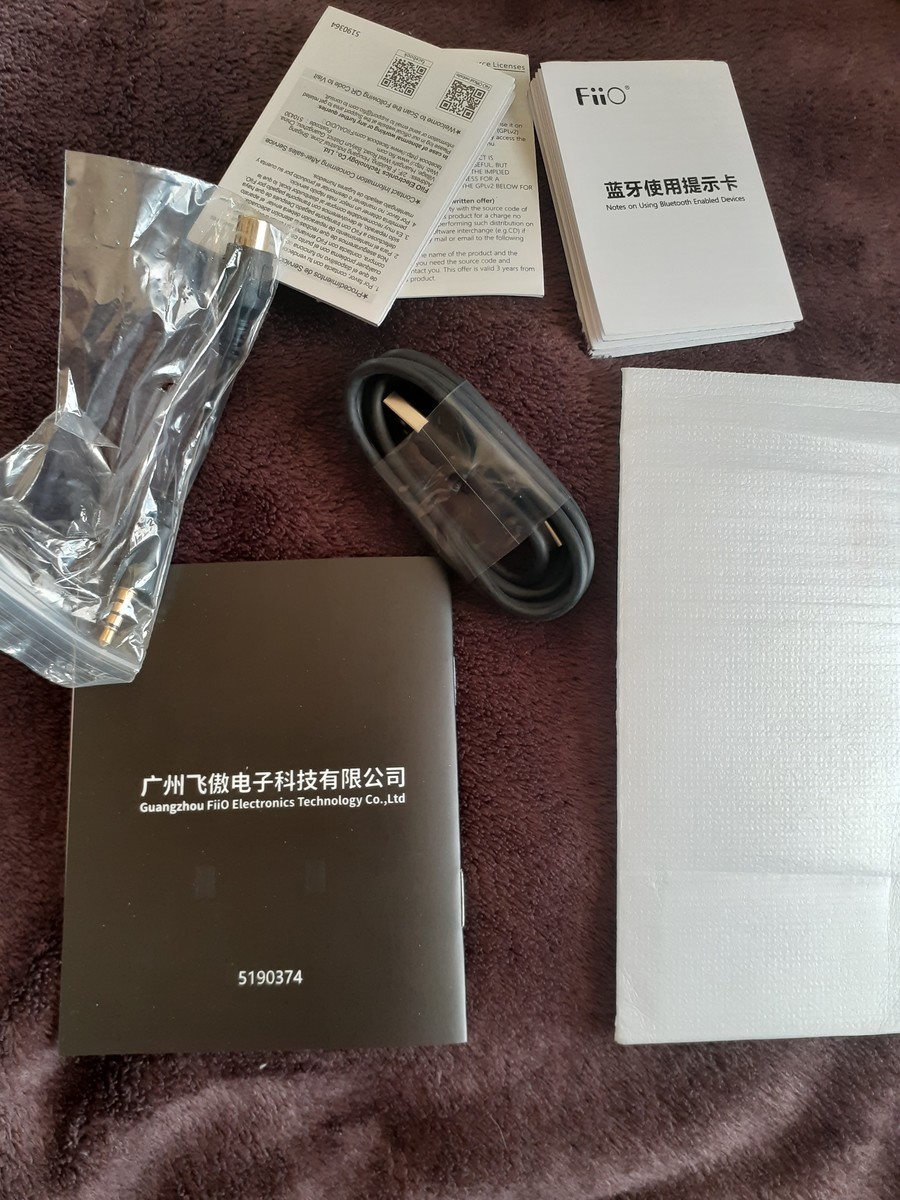 Although the package is not as elaborate in size and appearance as the Cayin N6II, it is of very high quality and has a feeling of high-end machine commitment. It will fully satisfy the desire of those who feel possessed by the package.

We will compare two models, KANN CUBE and Cayin N6II, which are probably rivals both in terms of price and consumer demand.

First is the appearance of the M15 when it was opened. Front. 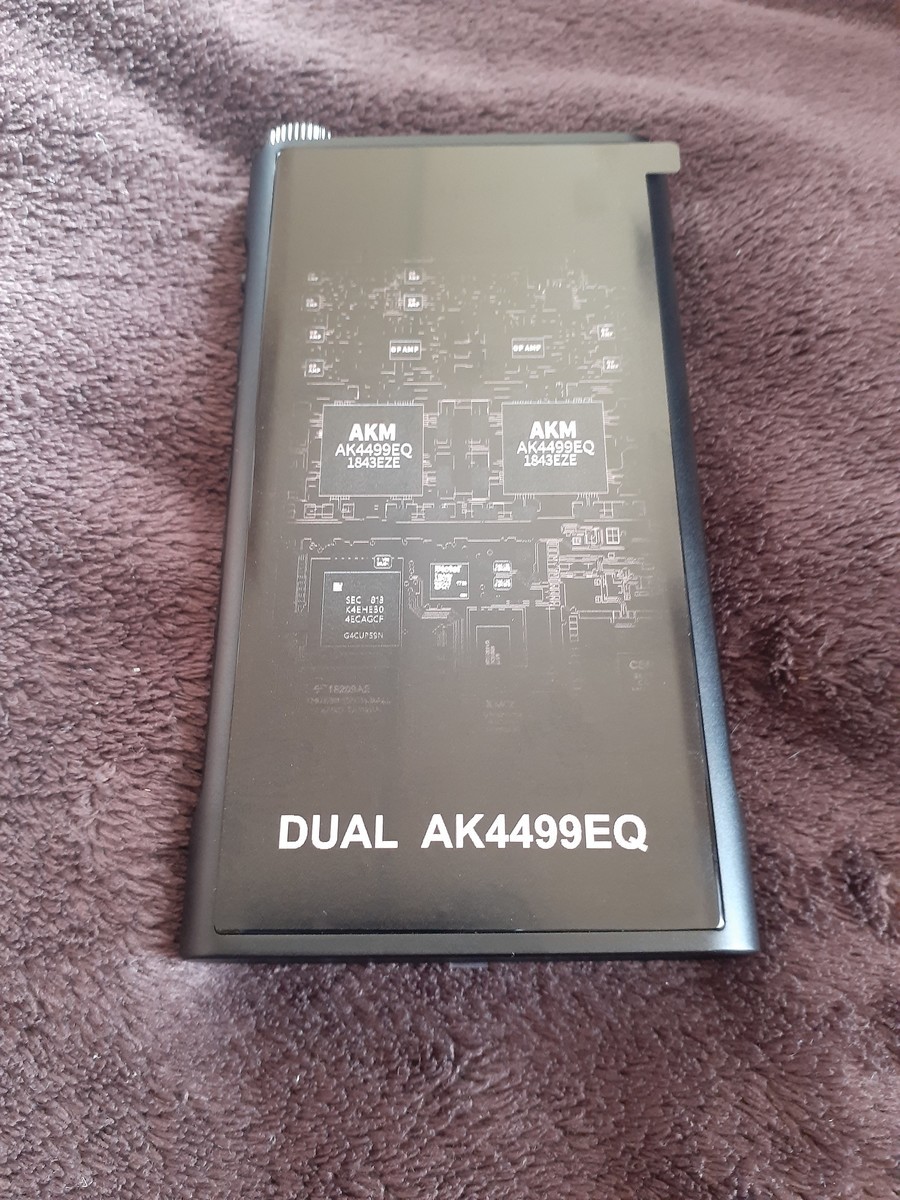 Back. Each has a protective seal. 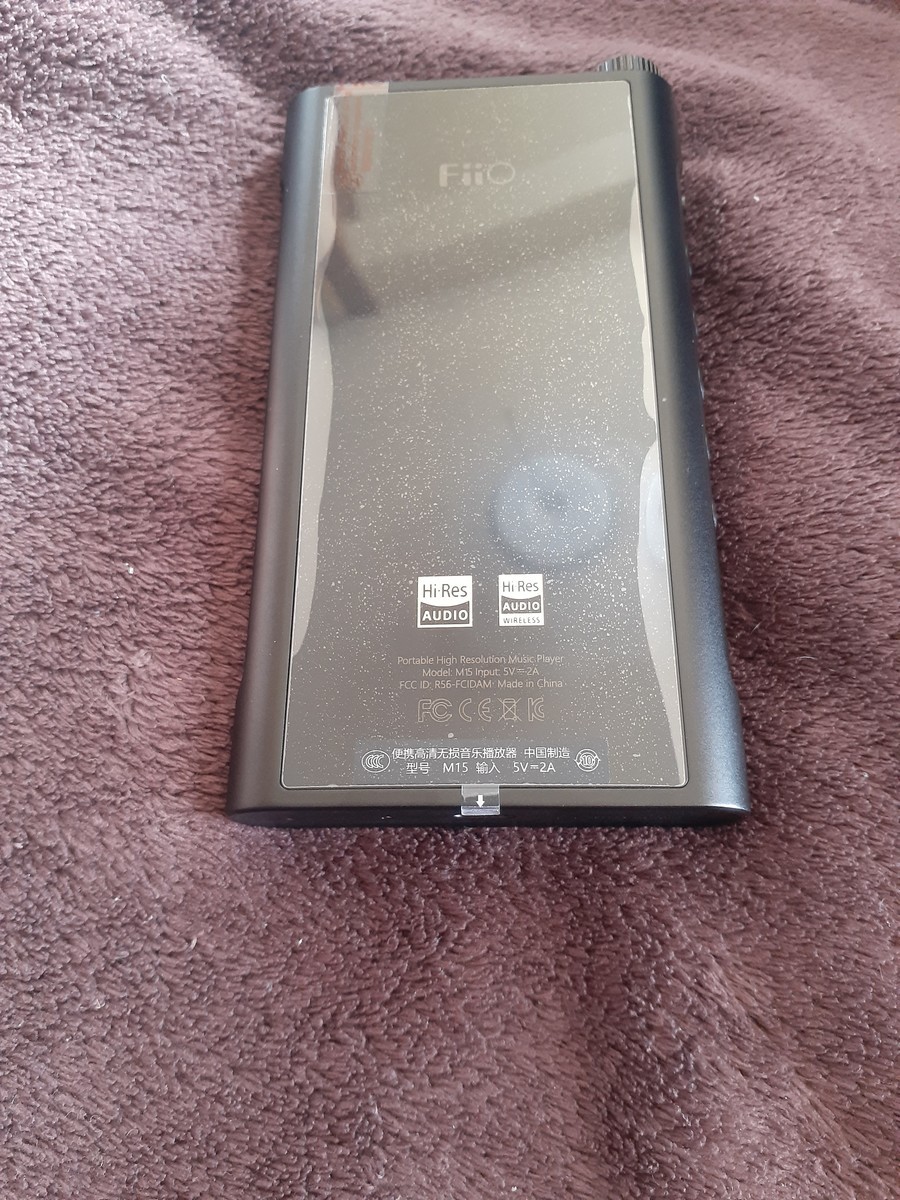 Comparison with KANN CUBE and Cayin N6II. The surface area is slightly larger than N6II. It is a portrait style with an impression similar to recent smartphones. Although it is difficult to understand in the picture, the LCD screen is slightly bluish in M15.

Since the screen size of each standard player and the display size of the album art are different, it cannot be simply compared, but the FiiO M15 seems to be the best in terms of screen resolution. 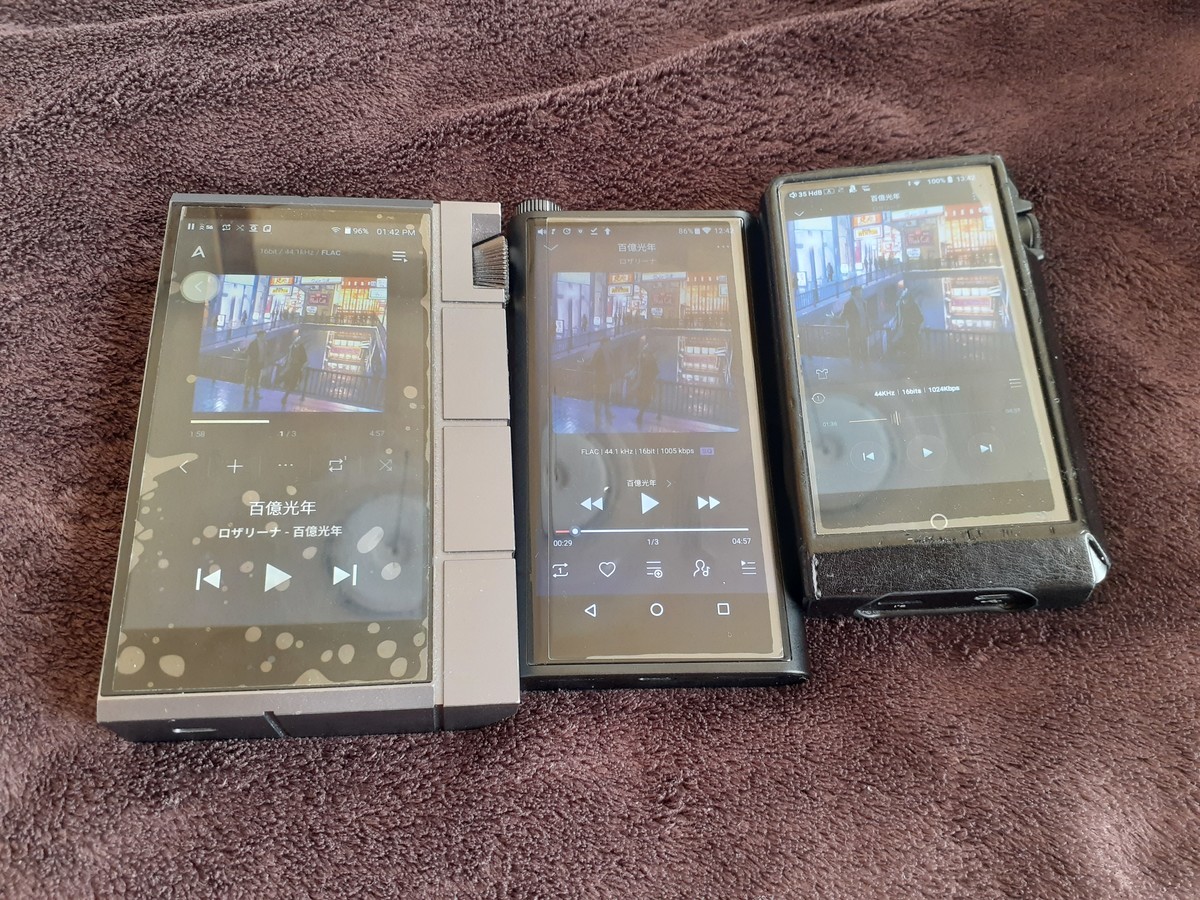 As you can see from the comparison of the thickness, it is overwhelmingly thin, it can be smoothly put in and out of the pocket, and the portability is the best among the three models. 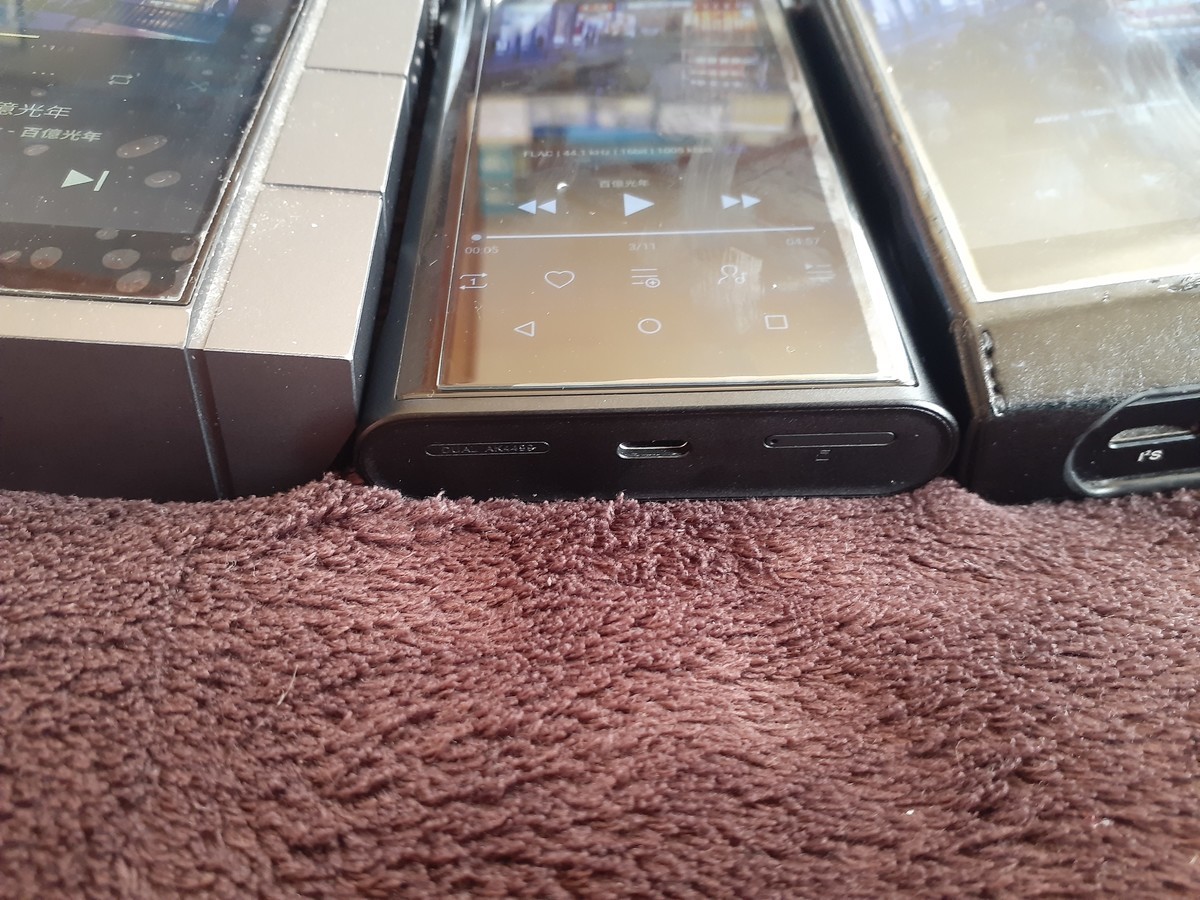 The agility and stability of the operation seems to be a lot to be deferred, as we have just begun to use it, but we don't feel any delay at the moment. Although I am unfamiliar with the FiiO Music interface, it still feels uncomfortable, but it does not mean that the default playback player behavior is strangely sluggish like iBasso DX200, for example (However, this seems to be due to the fact that the operation became heavier due to the official OS update, and at first the DX200 also felt relatively agile).

It is attractive that it supports music subscriptions such as amazon music as an Android player, and the operation of amzon music is also light. 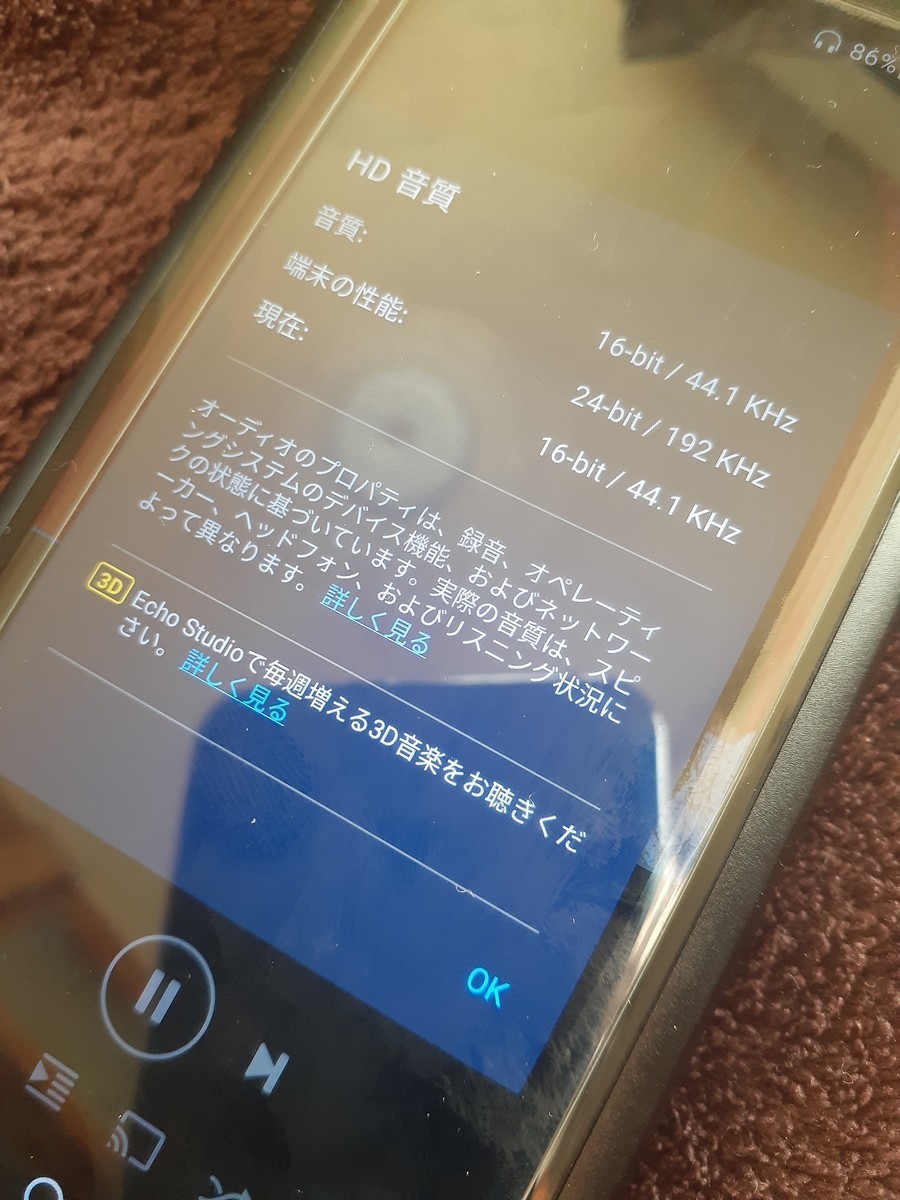 Now, let's compare the sound quality, which is the most important factor. The comparison targets are KANN CUBE and Cayin N6II / E01 (A), which are considered to have received the highest evaluation in terms of the balance between amplifier driving power and sound quality at the same price range.

I will check with STAX SR-009S + SRM-700S which emits delicate sound with electrostatic type. The song is"Hyaku oku kou nen (百億光年, it means 10 billion light years)" by Rosalina. This song has a feelings of transparency, has a shiny mid-high range, delicate metal clues, and a lifelike vocal expression.

All models have the best signal-to-noise ratio, making it difficult to find a difference in the quietness of the background. Frankly, whatever the quality level you choose, the answer counld be correct.

Therefore, the difference in impression of sound quality is the turning point. In general, the vocal expression will be judged to be the best with the M15. The FiiO M15 realizes the natural warmth and tough sound unique to Asahi Kasei's DAC chip, and the vocal expressiveness is excellent in terms of breath and realism. The N6II / E01 also achieves a relatively warm midrange, but if you want an M15-like sound, you should choose A01. The sound of both KANN CUBE and N6II / E01 tends to be dry, giving the impression of a slight lack of moisture.

The Cayin N6II / E01 seems to be the most mediocre choice among the three. All tests this time are performed with 3.5mm ports, but the point that E01 does not have a balance connection port may be felt as a minus point.

As a common impression of KANN CUBE and N6II / E01 (A), it can be pointed out that in this song, the hi-hat is easier to hear clearly, and seems to be in contrast to the M15 which makes the mid-high range shiny.

So what about the driving power of the amplifier? All of these DAPs are based on the concept of being able to drive all kinds of audio equipment all in one, and necessarily have a powerful amplifier mechanism. Can we say that even a model like the beyerdynamic T1 (impedance: 600Ω), which has a reputation for difficulty in sounding, they can sound satisfactorily?

Nevertheless, headphones like the T1 are rare, so at a practical level, all three DAPs can be said to have achieved an all-in-one sound environment as their claim.

What about functionality? KANN CUBE is based on Android, but is not very flexible, so it is clearly inferior among these three models. The M15 and Cayin N6II provide a complete Android-based environment and maximize the sound quality of your subscription. The operation is light and has no drawbacks.

Either N6II or M15 will be your choice if you value the versatility for the increasingly diverse music scene.

Final verdict: "The first impression is high perfection, there is no doubt that it will reign in the $ 1000 level"

The FiiO M15's first impressions are pretty amazing, and should provide a comparable or better music environment than a $ 1000 high performance machine. The amplifier power is sufficiently powerful, the sound quality is natural and high resolution, and there is little background noise. Compared to KANN CUBE, which has shown outstanding performance in terms of sound quality in this price range, the M15 has sound quality that may feel superior to some people, and It also has the same functionality as the Cayin N6II, which boasted the strongest functionality in this price range. Furthermore, portability surpasses these two models.

In other words, it is simply the strongest DAP currently in the $ 1000 range. For the M15, I would like to continue to check its usability and approach its true value.